Surround yourself with good people

By Jacki Wood, That they might have joy column, Nodaway News Leader

The first time I met Alex was about a week before classes were to begin my freshman year at BYU.

I knocked on the door of what would be my home for that first year of college, not knowing if anyone had moved in yet.

She opened the door holding a blow dryer and a brush, barefoot but dressed fashionably conservative, and her make-up fully done.

I noticed her lipstick.

I don’t remember what I was wearing, but I’m sure it was something like a T-shirt and basketball shorts and probably even a baseball hat.

I was not wearing lipstick – I didn’t even own lipstick – nor was I wearing any make-up for that matter.

Initial judgment (and not one of my best moments in life): Please don’t let her be my roommate.

“Nice to meet y’all,” she said in a very charming Southern way.

So this is the Texas roommate. Well, I do love her accent.

I lived in an on-campus apartment-style dorm my first year with five other girls. We had all written letters to each other before moving in to introduce ourselves. There were two from Utah, one from California, one from Kentucky, one from Texas and me from Missouri.

Alexandria Wagley from Gladewater, TX, was about as opposite of me as one could be. We ended up sharing a bedroom in that apartment, and despite my initial ridiculous first impression of her, we quickly became best friends.

We were roommates for two more years before I moved to California. And we had some amazing experiences together. Most of my memories from college involve her in some way. Football games, religion class, late-night Taco Bell runs, listening to music and singing when we should’ve been studying, watching “Friends” and “Seinfeld” and “ER,” driving up into the mountains, talking about guys and so much more. 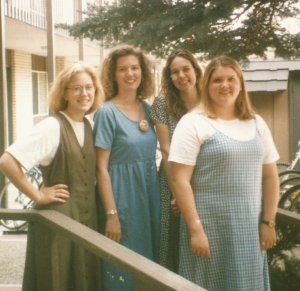 After I got married and started a family, we didn’t get to see each other much, living 1,200 or so miles away from each other. But we kept in touch as much as we could, in the days before texting and Facebook. When we did get together, though, it was as if we’d never been apart.

But our friendship in this life was cut short. Ten years ago last week, Alex died after a brief but brutal battle with cancer at the age of 29.

I miss her terribly. But she taught me so much in such a short amount of time that I feel she is with me every day. And I could go on and on about all of the things she taught me but I could fill a book.

What I loved most about her was that she was genuinely happy and genuinely good. And her Texas ways always made everything more fun.

In the years since Alex’s death, I’ve kept in touch with her mom. She once wrote me: “Alexandria always continued on and endured cheerfully. She had so many disappointments, but she always came up smiling. She was such an example for me. She was THE force for good in our family.”

It’s been said that you become like the five people you spend the most time with, so choose carefully. And I’ve been thinking about that a lot lately, with the anniversary of her death.

I love this quote by Quentin L. Cook: “People have so much to offer us if we are willing to learn from them. That is why it is important to surround yourself with good people.”

So that is my challenge for all of us. Choose your friends wisely – surround yourself with good people. We can learn a lot from them if we are willing, just like I did from Alex, who continues to bless my life in countless ways.

By Jacki Wood for the Nodaway News Leader

Located near Honey Creek and the Platte River in eastern Nodaway County, the tiny sawmill town of Wilcox is long gone and mostly forgotten.

But Aaron and Rosey Runde are doing their part to change that.

Prior to purchasing their farm near Honey Creek in the rural Parnell and Ravenwood area, the Rundes were out looking at the farm when they walked right past it without even noticing.

It wasn’t until Aaron walked by it a second time that he realized he was walking past a cemetery.

Located in the southwest corner of their farm, it is the Wilcox Cemetery and the oldest gravestone dates back to 1872.

“I didn’t know what to think at first,” he said. “I thought possibly it was a small family cemetery.”

He soon realized it was more than that.

When he started to uncover the cemetery, only two or three of the stones were actually still standing.

“Most of the stones were broken off and laid scattered in pieces,” he said. “Now, 67 stones have been found and pieced back together.” 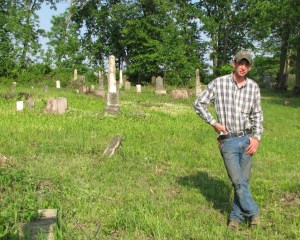 He said he’s spent well over a year’s worth of Sundays clearing and cleaning up the cemetery so far with the help of his wife and friends Josh Schmitz, Cody Schmitz, Caleb Spire and Kim Savano.

“I started by cutting down lots of good-sized trees and lots of brush and piling it all up and burning it,” he said. “It took a whole lot of clearing and cleaning before I could even think about mowing it.”

Runde said the work he’s done to restore the cemetery was mostly done out of respect for the people buried there but also from a feeling of obligation since it rests on their property.

“Reading the gravestones has been educational and enlightening,” he said. “Some of them have lengthy epitaphs. And a lot of the stones are infant graves which makes us thankful for medical advancements over the past 100 years.” 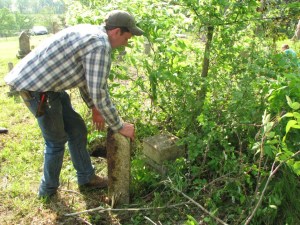 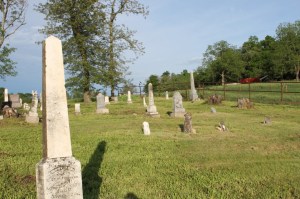 In addition to clearing and cleaning up the area, he has replaced the fence on three sides of the cemetery, added a new entrance gate on the west side and recently built a new pipe fence along the south edge.

“I plan to continue to make improvements,” he said, “along with keeping it mowed and cared for.”

Several folks have stopped by the “newly found” cemetery to thank Runde for his efforts to uncover their ancestors’ grave markers.

Runde said he has no way of knowing how many graves could still be missing so he’d like to have a map of the cemetery to see how many were there at one time. Also, if anyone knows of a good, inexpensive way to mend broken gravestones, please let him know. 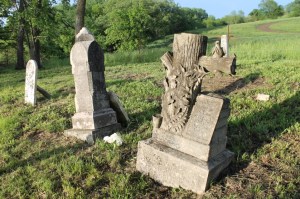 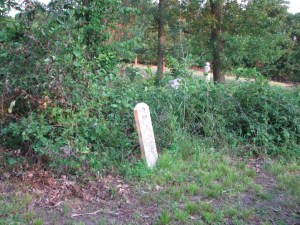