Written for the Nodaway News Leader By Jacki Wood

“Je suis Charlie” helped unite a country and the world following the January 7 attack on the Charlie Hebdo newspaper offices in France.

And a Maryville High graduate felt its effects much closer as she is currently a teaching assistant there.

Ruth Boettner has seen “Je suis Charlie” signs throughout Clermont-Ferrand, the city where she is working. The phrase, which means “I am Charlie,” was first seen on social media as a way to support freedom of speech and the victims of the attack. The movement has grown with marches throughout France and around the world.

“It’s truly a sad, terrible thing that’s happened,” she said. “The saddest part for the assistants in Clermont is that one of the victims, Michel Renaud, is from Clermont-Ferrand. His daughter is a student here.”

She said it’s always sad when people and organizations are targeted for the viewpoints they express.

“It’s felt even more when you are just a few degrees of separation away from someone who was killed,” she said.

Boettner was born in the Philippines but grew up in Maryville, the daughter of Richard and Bing Boettner. She graduated from MHS in 2009 and then attended the University of Nebraska-Lincoln where she had majors in French and global studies and minors in African studies and music.

Her background in French began during her sophomore year at Maryville High when she started studying the language. She also took a trip to France after her senior year with her classmates and their teacher, Linda Ferris.

“I thought maybe I’d minor in French when I went to UNL at the most, but I quickly realized how much I loved the language,” she said. “After one semester, I realized I liked the French curriculum (and) decided to be a French major.

“It really helped me with my global studies and African studies curriculum but especially my honors thesis, as I spent a lot of time translating primary source documents from French to English.”

She participated in a Study Abroad program in France at the Université de Caen Basse-Normandie in 2012.

“While at Caen, I more or less studied French as a foreign language,” she said. “It was really what pushed me over the hump in terms of learning the language. You don’t really know how well you know it until you actually have to speak it every day.”

Altogether, Boettner has spent about eight years learning French and considered herself nearly fluent. When she graduated from UNL in May 2014 and another opportunity to continue her education fell through, she applied for the Teaching Assistant Program. She said she hopes to finally attain that fluency through this opportunity.

While continuing to learn the French language is a large part of why she is in France, her education is going far beyond as she is learning more about the world around her.

“There have been multiple anti-Muslim attacks throughout France since the Charlie Hebdo attack,” she said. “Of course, they may not all be directly related. Still, I worry about how this will affect France’s relationships with its Muslim citizens and residents.”

Ruth Boettner applied for the Teaching Assistant Program in France last January to continue her education.

“I really wanted to go back to France,” she said. “And I worked with kids all through college and loved it, so it just made sense.”

Boettner received notification in April that she had been hired to teach in Clermont-Ferrand, and after graduating in May from the University of Nebraska-Lincoln, she began preparing for her return to France.

Her teaching contract is from October 1 to April 30 but she arrived in mid-September and plans to stay through the latter part of May so she can do some extra traveling before returning home.

Before she left for France last fall, she said her goals included finally becoming fluent in French, traveling and enjoying the opportunity to return to the country.

“I only spent about three months in France when I studied abroad,” she said. “And now I’m hungry for more, I suppose you could say.”

She continued: “I love working with elementary-aged kids, watching them learn and grow, and I hope I can do that for my future students.”

Boettner has been teaching in France for roughly three months now and said it has been going really well.

“I had a little trouble getting into the swing of things when I first started out,” she said. “I’ve worked with kids in after-school programs and summer camps for several years before this, but teaching solo in a classroom setting is really a different ball game.”

She said her biggest struggle was starting with things that were too difficult too quickly.

“It takes time, of course,” she said. “You get a grasp on where each individual class is in their learning and how they learn best and you go from there.”

“The students at my Friday school are in a specialized English program in which they have English classes four days a week, so they’re more advanced than my Tuesday students,” she said.

Boettner said her favorite part of teaching has been watching the students succeed.

“When my students get so much joy from their little victories,” she said, “it’s great to see that kind of excitement from learning.” 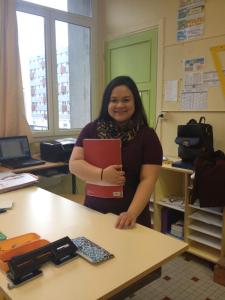 One of her favorite experiences has been with a Thanksgiving lesson she gave, where she made big hand-shaped turkeys for each class. She asked the students what they were thankful for and then wrote those things on the turkey.

“They would usually give me the French word and I would write the English word next to it,” she said. “A few of them even said ‘We are thankful for Ruth’ and for their English lessons. I was feeling particularly homesick that week so it definitely cheered me up.”

The rest of her work time is spent fulfilling duties for the conseillers pédagogiques, who are the people who train the teaching assistants and new teachers.

So far, she has translated training documents and recorded her voice for use as a teaching tool for them. She, of course, also spends a few hours a week planning lessons and said she may begin a weekly English discussion group for volunteer teachers.

Outside of her work commitments, Boettner said she has enjoyed getting to know the other language assistants and exploring the city.

“The region is absolutely beautiful,” she said. “I feel really lucky regarding where I am and the people I’m sharing this whole experience with.”

She also spends her free time studying for the GRE and applying to graduate schools, which she hopes to begin following this teaching assistance opportunity.

“Fingers crossed, I’ll be entering a doctoral program in African history,” she said. “I’ll still be using my French. I’m planning on focusing on French-speaking African countries in my future research.”