By Jacki Wood for The Herald, Sweet Springs, MO 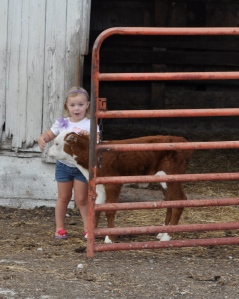 Three-year-old Reagan Sneed skips about the family farm, kicking up dust with ease in the unusually dry mid-September afternoon air.

Happy and carefree, she sings as she skips, trying to entice Amber, the weeks-old bottle calf, to follow her lead. Reagan grabs the calf by the neck and kisses her.

“Amber is my friend,” Reagan says. “I help feed a bottle. And I sing to her.

“She runs and jumps. And sometimes she gets frisky.”

The bond between a girl and her calf has formed.

And so it begins with Reagan. Another generation. The fifth generation, actually, of Gregory Polled Herefords.

E.H. Gregory started the family business in 1932 in Green Ridge and later moved to the Houstonia area.

His son, J.D., carried on the tradition and passed it on to his son, Kevin, who continues the family business today.

Kevin and his wife, Barb, have four daughters – Jennifer, 33, Devann, 21, Morgann, 19, and Jordann, 18. Jennifer and her husband, Brian Sneed, are the parents to Reagan and her one-year-old brother, Rhett.

All live within a mile of the family farm. And all of the girls began showing cattle at the same age as Reagan is now.

Showing cattle takes dedication and responsibility. The process begins in December when they choose their animals and begin breaking them. It continues through the end of the summer with local shows, the Missouri State Fair and the Junior National Show.

Kids can begin showing at age three with bottle calves for local shows and the junior nationals are for youth ages 8-22.

It means no days off. No snow days. Early mornings and late nights. Taking care of the cattle on those unbearably hot summer days in the humidity Missouri is known for as well as the bitter cold, snow and ice that wintertime can bring.

They walk, wash and work them every day, spending an hour or even two or three with them, depending on the time of year.

“The more you get your hands on the animal, the better they will act,” Devann said.

After months of preparation and hours of work, taking their cattle to the shows can lead to mixed feelings. Some of the cattle they are excited to sell and some they have become very attached to and are hard to see go.

“They are like your children and it’s very hard to get rid of them,” Jordann said.
“I cry every year no matter how old I am.”

As the years pass, the Gregory name has become synonymous with success. And at cattle shows, that means bringing home the Grand Champion purple banner.

“We’ve done pretty well,” Kevin said. “We’ve all, at some point, brought the purple banner home. And we have sold animals that we have raised that have done the same thing.”

While the successes have been many, there are a few that were especially significant to each of them.

Last year, Devann pulled a little heifer out of the pasture a couple of weeks before a show, not expecting her to do well. But she was named Champion Division Winner in both the FFA and the open show.

Sometimes, though, it’s not the cattle being shown, but the cattle they’ve sold. In 1999 while attending the National Western Stock Show in Denver, they came across a calf that Kevin had sold who had won Reserve Division Champion.

But it’s not just about the champions or the results.

It’s also about the process, traveling together, meeting people and having fun together.

“Going to different shows, like our junior nationals,” Morgann said, “you get to meet and make friends from all over the United States that you wouldn’t necessarily have the opportunity to meet outside of showing cattle.”

They form friendships that last over the years. And when they are at a show, Kevin will invariably run into someone he knew growing up.

“We’ve been in long enough that kids I showed with 25-30 years ago, now their kids are showing,” he said.

Barb grew up in Kansas City and married into this but she seems to be the glue that holds it all together.

The girls said she helps wash the animals, helps walk them and she makes sure they get where they need to be with everything they need – and on time.

When it comes down to it, it’s really all about family.

“It’s something you can do with your whole family,”Barb said.

From J.D. at 80 years of age down to Reagan at three years, they are all involved and love it.

Kevin said his father still goes to all of the shows.

“Wherever the kids are, he’s there ready to help,” he said. “With Reagan and the bottle calf, he makes sure he’s got her bottle ready to go and he goes out there with her. It’s neat to see him with her.”And it would seem the Gregory legacy will continue for years to come.

By Jacki Wood, Sports Editor, written for The Concordian

After a turnover-laden first half, the Concordia Orioles turned things around in Friday’s home opener against the Higginsville Huskers. But it wasn’t quite enough as the Orioles lost 42-26.

“Turnovers in the first half dug a hole that was difficult to overcome,” Concordia head coach Tom Gramates said. “We went into a funk in the first quarter. But we were able to pull ourselves out of it.”

The Class 2 Huskers entered the game after going undefeated during the regular season last year with a nice playoff run.

“We knew that Higginsville was a quality team and we had our hands full,” Gramates said. “Yet I believe, and our players believe, we could have won the game had we taken care of the little things.”

With three minutes left in the first quarter and the Huskers leading 20-0, Concordia put together a solid drive down to the 17-yard line to end the quarter. Continuing that drive as the second started, quarterback Austin Hon ran it in for the Orioles’ first TD of the game. Cass Heimsoth completed the two-point conversion to make it a 20-8 game with 10:34 left in the half.

The Huskers responded quickly to go up 28-8 where the score remained at halftime.

A couple of turnovers by both teams to start the third quarter made it seem as though the turnovers would be the story of the night.

But the Orioles had other things in mind.

Late in the third, Heimsoth and Cory Meineka put together several long runs down to the Husker seven-yard line. Meineka scored on a shovel pass from Hon to bring the score to 28-14 with three minutes left.

And after a strong defensive stand and a muffed punt recovered by the Orioles, the momentum quickly moved into Concordia’s favor.

Continuing their comeback, Concordia recovered a fumbled kickoff, and on the first play of the fourth quarter, they scored again on a 30-yard pass from Hon to Beydler, making it a 28-26 game with 11:53 left in the game.

“It was a fun game with a lot of emotion and heroic play by our guys,” Gramates said. “It was kind of like riding the back roads on an eighth of a tank of gas. You know you’re going to run out and eventually end up walking.”

Down by two, the Orioles weren’t quite ready to get out and walk home just yet.

They caused another fumble on the kickoff and recovered it to take over at the Huskers’ 48-yard line at the 11:51 mark.

But on the first pass of the drive, Higginsville intercepted a pass by Hon. And after a couple of big defensive stops by both teams, the Huskers scored with 7:09 to go to make it 35-26.

Higginsville began running the ball well – and the clock out – late in the fourth. They scored one final time with 1:22 left, ending Concordia’s comeback and the game, with a final score of 42-26.

“This group will improve, no doubt about it,” Gramates said. “The character they displayed Friday night was exceptional. I was really excited to see the emotion we played with (and) the attitude of playing together.”

Gramates said Higginsville made a point of taking Heimsoth out of the passing game, which allowed other receivers to have good games.

“We found a couple of really good players that were question marks,” he said. “Austin Beydler was a great compliment to Cass Heimsoth on the other side. He had an outstanding game. Jordan Schuelter also came up big with some key catches.”

With quality receivers and a solid quarterback, Gramates said they have a more diverse threat than last year.

“I don’t know the last time a Concordia team threw the ball for 277 yards in a competitive game,” he said. “It showed us a lot.”

Gramates said the Orioles started five linemen that had not played “a meaningful down in varsity football,” and while they made mistakes, he said he believes they will get better.

He was also impressed by the defensive play of Meineka and Layne Baldwin.

“They are the heart and soul of the defense right now,” he said.

The extreme heat, which caused the game to be pushed back an hour, also caused some issues with cramping. The Orioles also suffered a couple of injuries including Andy Galloway, the team’s kicker.

“Had we been able to kick the PATs in the second half,” Gramates said, “we would have taken the lead in the fourth quarter.”

Hon finished the game 15-34 passing for 245 yards, a touchdown and four interceptions. Beydler had seven receptions for 128 yards. Meineka had 14 carries for 75 yards and Heimsoth had six carries for 48 yards.

The Orioles are back in action this Friday at home against Orrick.