We are never going back there again!

“That they might have joy” column by Jacki Wood

I was at the store last week when I saw a kid giving his mother all she could handle. He was screaming at the top of his lungs while she was dragging him out the front door with a toddler on her hip. She not only looked thoroughly frustrated and embarrassed but defeated.

I’ve been there plenty of times.

She was breathing empty threats at her kid, as I have done so many times before. Things like, “We are never ever coming back here!” or “No more TV for the rest of your life!” or “If you don’t stop that this instant, I’m going to . . .”

Seeing this young mother with her two kids reminded me of an experience our family lovingly likes to call “The Melted Cheese Meltdown.”

It happened a few years ago when we went to one of those fast food restaurants with the big indoor play places. Hunter was five, his first day of kindergarten, and Hannah was three. The destination had been chosen by my husband, Larry, because they had this new Angus burger with melted cheese on it. 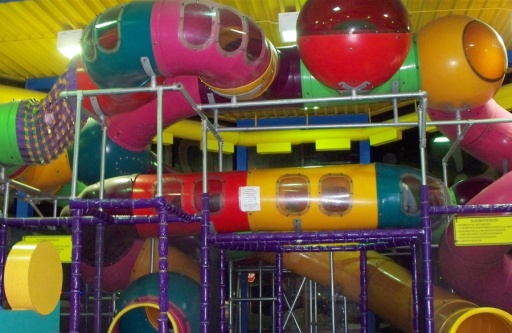 The play place area was packed and loud. Kids were darting everywhere and parents were busy talking to each other and ignoring their children.

Let me interject here that this was not the first time my kids had played at this restaurant. And Hannah has always been one of those daredevil kids, no fear, always jumping or hanging or swinging from something, especially at a place like this.

So what happened next was quite a surprise.

Larry and I began eating while I watched the kids go up and down and all over the place. I had been sitting for maybe a total of three minutes and taken maybe four bites of my melted cheeseburger and a few fries when the meltdown began.

Of our two children, everyone knows which one is usually loud. And it’s not Hannah.

But on this particular day, it was Hannah who was exercising her vocal cords. I got up and headed over to where the sound had come from, in the far corner of the room, opposite from where we were sitting. I could see tiny fingers poking out of the mesh crawl space at the very top of the play equipment.

Not knowing what else to do, I sent Hunter up to try and get her down. As he went over to the stairs, I noticed he was walking funny.

I also motioned for Larry to come over and help.

By now, there were other kids coming at me saying, “There’s some kid up there who’s scared,” “A little girl is screaming,” “Is that your kid?”

Yeah, she’s mine. Why do you think I’m standing here, looking up at her, trying to calm her down?!

Nothing seemed to work; she just kept screaming.

My patience went from going to gone. I asked Larry to go get her, and as he started up, I felt someone pulling at the back of my shirt. I turned around and saw Hunter.

I now noticed why he had been walking funny earlier. He mumbled a few words about what was wrong, but I didn’t need to hear them. I could smell it and see it through his shorts and down his leg.

Completely mortified, I rolled my eyes, said a few choice words under my breath and told him to go stand over by our table. I silently prayed no one would notice.

By this time, some girl of about nine or ten had Hannah by the hand and was leading her toward me. I hadn’t even noticed the screaming had stopped. I thanked the girl, grabbed Hannah’s hand and looked down to see if she was okay. She was a snotty, wet mess, but she was smiling at me, as if nothing had happened.

As we made our way back over toward the table, the packed room had gone quiet, with every eye fixed right on me. Hannah started pulling away from me and said she wanted to go back up again.

Sorry, not a good idea, I had said, with more than a hint of indignation in my voice.

She began crying – again – and so I started to physically drag her to the table. Not bothering to clean him up, I took Hunter with my other hand and pulled them both out the nearest exit to the car.

I grabbed an old blanket from the trunk, wrapped it around Hunter’s bottom half and threw both kids in their car seats. I got in, sighed heavily and started the car.

Not one word was said as we drove home. I wondered what had prompted the meltdown, but I was not calm enough to ask.

As we pulled into the driveway, I took a deep breath and uttered one of those aforementioned threats . . . that we would not be going back to that restaurant – ever again . . . and we never did.

This entry was posted on Monday, April 28th, 2008 at 10:40 am and posted in Columns. You can follow any responses to this entry through the RSS 2.0 feed.
« I will be forever changed because of Grace
The story that renewed my faith and hope »